The Rottweiler is known to be the watchdog for excellence, brave, aggressive, very protective towards its territory and its master. 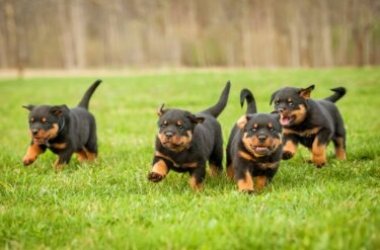 It is a Molosser that, with its size and its hard-sounding name, inspires fear at first sight.

He is a flawless watchdog with a strong sense of territory. Firm education is needed to mitigate his strong and dominant character.

Yet, in the family he knows how to bring out his sweetest, affectionate and patient side, especially with children.

The Rottweiler is in fact appreciated by many for its great intelligence and docility. One thing is certain: you and your family will be protected with this faithful companion.

Let’s find out together.

The Rottweiler is a dog that has origins in Germany, where it began to spread from the 1800s. It spread to the rest of Europe only from the 1900s. His ancestor is the Tibetan mastiff.

The name of the breed derives from the German city from which its diffusion started (Rottweil); initially it was used as towing dog for freight wagons or as a guard dog for butchers’ meat or, as a shepherd dog to guard the grazing herds.

The breeders considered him a very valuable ally. The Rottweiler helped them with herd management and protected them from banditry and attacks by wild animals. He was such a brave dog that even the money from the sale of livestock. There was no better keeper than him.

Characteristics and appearance of the rottweiler

The Rottweiler is a large breed dog, let’s go by order.

Its weight can fluctuate between 40 and 50kg.

How long does he live?

The average life expectancy ranges from 10 to 12 years.

The coat of the Rottweiler is short and shiny. The breed standard requires that there is also an undercoat layer. The color allowed by the standard is black with brown / tawny markings, present on the eyes, muzzle, cheeks, chest, internal areas of the limbs and base of the tail.

There is also a very rare variety of this breed with a white coat, with medium length hair.

As for the tail, the custom of cutting it is still very frequent, however progress has been made, since initially it was cut off “ex officio” by all breeders, while now there is a discretion in this cruel practice.

How aggressive is the Rottweiler? character and training

Many of us know this dog for its reputation as an aggressive and dangerous animal. In reality the Rottweiler is an obedient and calm animal, endowed with a lot of balance.

He is by nature easy to train, however some sides of his character are strong. When necessary, in fact, it is a courageous and protective dog towards its territory and its owner.

He is very docile and affectionate with children, especially if well trained. He lends himself to being a meek playmate and his attachment is almost touching.

The Rottweiler has undergone an evolution in the areas of its use by humans. Today it is above all a guard dog and personal defense, which requires a strong harmony with his master.

It is very important that the dog gets used to it from a puppy to interacting with other people and animals to keep him from becoming nervous and develop excessive aggression if someone invades “his” territory.

Tip: Find out how to train a dog not to bite children

This breed has a good tolerance to cold climates, so it can live outdoors (given the necessary protection from the elements). However, given the close relationship with his master, he prefers to be close to him and therefore be at home with his family. This implies further attention in training, so that his attachment to the territory does not make him become the “master” of your home as well.

What is the ideal Rottweiler diet? breeding and care

The Rottweiler has a lean and very muscular physique, which guarantees agility and sprint. Maintaining this constitution is essential both for its health in general and for not altering its main characteristics.

The Rottweiler is therefore a big eater and needs a rich diet in order for his strong bones and powerful muscles to develop properly. 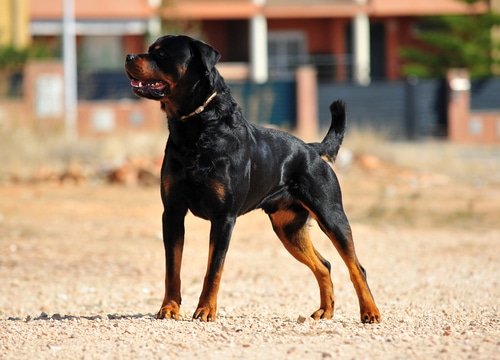 Must keep a very balanced diet, paying particular attention that calcium is never lacking, especially in the early stages of his life. The consequences it could face in case of deficiencies will be severe bone and limb problems.

The daily ration of the adult Rottweiler is approximately 800 grams of croquettes specially adapted (the amount and type of food the Rottweiler receives depends on his weight, age and health).

The daily requirement should be administered in two meals a day.

Like all large dogs, they can suffer from stomach upset. Therefore, it is important to do rest the Rottweiler for at least two hours after eating.

The grooming of the Rottweiler

Requires grooming minimal. A vigorous brushing per week is enough to remove any parasites, dead hair and keep the hair healthy.

This will also help renew the coat, as it will help eliminate the woolly undercoat.

What are the most common health problems in the Rottweiler

It is a hardy and very robust dog that rarely gets sick.

However, they are prone to certain diseases.

The most common health problems are

How much does a Rottweiler puppy dog ​​cost?

A Rottweiler puppy can cost between 600 and 1000 $depending on its innate qualities or inherited from its family of origin.

With these figures, in fact, we will take a complete copy of certifications about its origin, its parents, its health conditions, vaccines and all the practices carried out so that the dog enjoys good health present and future.

As with any “purebred” dog, it is possible to find puppies at much lower prices (even 200-300 $), but running the risk of getting a dog about which nothing is known backwards (parents, hereditary diseases, conditions of health etc.).

So, as always, we recommend the utmost attention when deciding to buy a dogso that you do not find yourself in front of serious health problems that could compromise your normal life, as well as economically affect your adopted family.

Important: always remember that a serious kennel, when buying a puppy, must issue all the dog’s documents: pedigree, certificates and health booklet.

Who is the Rottweiler suitable for?

Is it a suitable dog for you? let’s try to understand it by going step by step

The Rottweiler is a quiet dog that can live in an apartment (with several outings per day).
A house with a back garden where they can spend their energy is preferable.

All familiar situations are suitable for the Rottweiler. He gets along well with children, but does not like to be treated with disrespect by little ones.

The female is more suitable for children, because she is less independent than the male, fits better into the family and is particularly protective of the little ones.

He has to walk a lot

The Rottweiler needs a lot of exercise. The owner must be a sportsman and must be available for his dog for several hours a week.

Most of these hours will be devoted to walks, park visits and workouts.

Patience and commitment to education

The owner must be willing to invest in the education and socialization of the dog. A guard dog by nature, a poorly trained Rottweiler will quickly become a nuisance to their owner, family and others, as they will tend to be suspicious and even aggressive.

Is it okay as a first dog?

No, it is not recommended for you if you have never had a dog – it is better suited to an experienced owner who is firm and patient.

Unfortunately, the Rottweiler today has a bad reputation as a “dangerous dog” due to some irresponsible owners who condition it to aggressive behavior through cruel and unnatural training. It is actually a strong character dog, but fundamentally good and loyal.

Here are some answers to your questions

How much does a Rottweiler drool?

Some specimens have a tendency to drool a lot, especially large males whose corners of the mouth are not well closed.

Let’s start with points in favor:

But also the negative points:

Other breeds of shepherd dogs

Find out all about the various breeds of shepherd dogs …

Other tips for your dog

Here is also some other useful information about dogs:

How much does it cost to keep a dog per year: food, vet, grooming