Considered by most to be an aggressive and dangerous dog, the Pitbullby its nature, it is an affectionate and affable dog even with children, as long as it is raised and educated correctly. 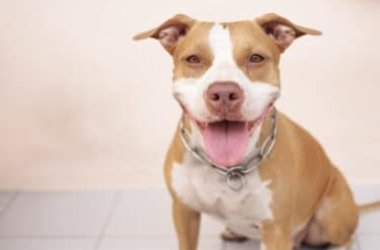 With the right training, his aggression will be deleted and will show qualities of gentleness, calm and loyalty. It is disease free and pretty easy to care for. An excellent choice but we recommend that in every public outing it must be accompanied by a muzzle and leash.

Let’s find out its character and how to best take care of it.

Born in medieval times from the cross between the Old English Terrier and the Old Bulldog, two English breeds. Its “ancestors”, in 1800, were used in Europe as working dogs, and later trained for fighting, an ignoble pastime, but much loved by the British of the time.

The English word “pit” actually means “arena”, the place where the bloody encounters took place. Precisely from this habit, this breed has been attributed an aggressiveness and a danger that are not its nature.

In the United States, in the 1980s and 1990s, legislation was even drafted that prohibited families from raising Pit Bulls because of their “inherently aggressive and dangerous nature“. In France it is currently prohibited.

Even in Italy, for a certain period, Pitbulls were included in the list of dangerous breeds for humans.

Why is the pit bull not recognized as a breed?

The term PitBull indicates the American Pit Bull terrier, a breed recognized as such only by the English federation UKC (United Kennel Club) and by the ADBA (American Dog Breeders Association).

In Italy, on the other hand, the FCI (International Cynological Federation) and the ENCI (Italian National Dog Association) have not included the Pitbull among the list of breeds.

How many variants of Pitbull dogs are there?

Let us dwell on some breeds

Massive, muscular and with a wide jaw, it is a crossbreed specially created for fighting. Commonly considered aggressive, this has not in fact been proven.

Weighing between 25 and 40 kilos, it can be recognized because when it pants it looks like it is smiling.

Its name is a clear reference to the red-brown truffle. In this case too, it is a question of

of an intersection created in Ireland around 1830. Between 25 and 30 pounds in weight, it is less massive than other Pitbull varieties. It has long, lean legs and a muscular back.

Similar to the Red Nose, it has a white coat and blue or black eyes.

It is generally considered a short-haired and muscular Pit Bull, actually, the American Staffordshire Terrier (abbreviated Amstaff) originates from fighting dogs. Considered the “cousin” of the traditional Pit Bull, it is a brave but not aggressive dog.

Very strong on a muscular level, the Pitbull manages to develop a nice mass, while maintaining a lean and rather slender shape.

How long does he live?

The average life expectancy ranges from 11 to 13 years.

What is the character of the Pitbull? why is he aggressive?

As already said at the beginning, that the Pibtull is aggressive is a commonplace to dispel.

When raised in an affectionate and emotionally stable environment, she can confidently develop her true sweet and loving character.

In short, everything is in the way in which it is trained: if the owner incites him to aggression, he will certainly become a dangerous dog (but this is true for any other breed!).

In reality, the Pitbull is a strong and courageous dog, but he can also be affectionate and loyal to his owner and his family.

Likes to play with children; it is even used for dog therapy to help people with autism.

Very intelligent, even if a bit stubborn, he can handle both physical and mental stress well.

Relationship with the master

Very affectionate with his family, he loves spending time together with his owner and other family members. Courageous and generous, he would defend them even at the expense of his safety.

Playful and affectionate, having an important build could risk accidentally dropping the children during the game.

It all depends on the method by which it is educated and trained.

Relationship with other dogs

Being a dog created and trained to fight with his fellow men, he can attack other dogs to the point of becoming very dangerous. Never leave it unattached in the presence of other dogs.

This aspect refers to what has just been said above. It was not born as a ferocious dog, but being selected to bite other dogs, this trend is not to be underestimated. It would be appropriate to give him the ‘right’ games on which to vent this nature.

He is a dog that adapts well to apartment living, however he needs to move and play outdoors for at least an hour a day.

The Pitbull does not require special attention compared to its peers. He requires little care as he has a short, hard and shiny coat that requires very little maintenance.

A weekly brushing is more than enough for this dog that sheds very little hair. A rubber brush is enough to remove dead hair.

Check your skin regularly to check for any skin conditions. As for washing, the Pitbull is content with an occasional bath.

It is advisable to check the condition of the Pitbull’s eyes and teeth. Do not hesitate to brush if tartar is deposited on it.

His ears also deserve regular attention to make sure there are no traces of dirt or any kind of infection.

Finally, if they don’t wear out naturally, the nails need to be trimmed. If you are new to nail care, it is advisable to seek advice from a veterinarian.

It is not subject to particular problems, on the contrary. Considering also his physical prowess, he is generally in excellent health.

It should obviously be subjected to the normal routine checks and prophylaxis against ticks or fleas. It also requires preventive treatment for heartworm disease.

It rarely gets sick, however, due to its very short coat, it is particularly sensitive to heat and cold. extreme It is therefore important not to take it outside in very cold winters and avoid the sun in summer.

It is a dog that needs to exercise every day, both to maintain its vigorous state and because it has a tendency to gain weight. In this regard, it is also necessary to follow a balanced, varied and uncomplicated diet.

It can be prone to various diseases such as allergies and dermatitis.

Who is the Pitbull suitable for?

The Pitbull is not the right dog for anyone who has no experience with animals. It is in fact a dog that must be educated from an early age.

Apart from the initial training, he is a strong dog that has no special needs. Here are the only attentions he needs:

How much does a pit bull puppy cost

Being a purebred dog, the prices for a puppy are quite high. A Pitbull puppy, tested and pedigreed, costs on average between 1,000 and 1,500 $.

Be wary of breeders who sell them for less: it could be puppies bred improperly, without attention to the health and character of the parents.

How much does it cost to keep a Pitbull per month?

In addition to the initial cost, the pit bull generally does not require special expenses. For food, consider about 45.00 $ per month.

Other articles on dog breeds that may interest you:

How much does it cost to keep a dog per year: food, vet, grooming